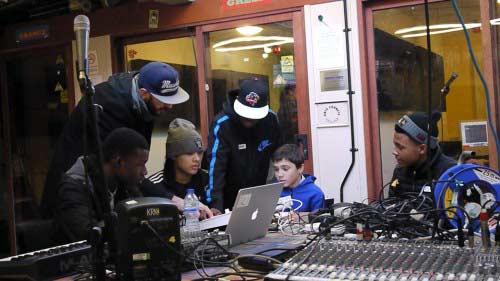 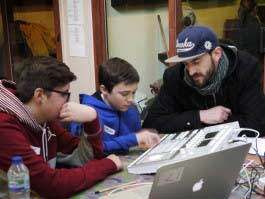 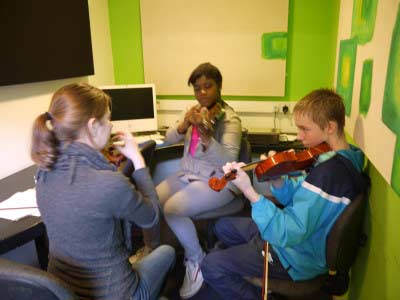 Symphonize is a ground-breaking project between Soft Touch Arts and the Philharmonia Orchestra. It began on Thursday January 8 2015, taking workshops to four different groups of young people in Leicester. Funded by the J Paul Getty Jnr Charitable Trust, it was a very unusual combination that most people wouldn’t imagine, but that’s just Soft Touch for you.

The project involved classical music from the Philharmonia Orchestra coming face to face with urban and electronic music such as Hip Hop and Dubstep. Musicians from Soft Touch and the Philharmonia worked together and encouraged participants to join with them and create a unique and distinct mix of urban/classical music that most people won’t have heard before!

The goal of Symphonize  was to recreate Mussorgsky’s ‘Night on a Bare Mountain’ using a classical urban mix to put together a 25 minute piece. Twenty one young people aged between 14 and 19 from New College and Lancaster Boys school and the Leicester YMCA made up the group; which they performed alongside the Philharmonia and Soft Touch musicians at the Y Theatre on Saturday January 17.

It was a great experience for all involved, as the participants got to experience a whole new type of music as well as get to meet new people and learn new musical skills that they can continue with in the future.

Participants got to learn how to compose, produce, record and perform their music as well as to appreciate each other’s backgrounds.

An exceptionally rewarding moment for Soft Touch, was watching one of our long term participants mentor other participants. Jake, who has been a participant with Soft Touch for about six years and is also an aspiring rapper, came in to mentor the boys who were writing the lyrics.

Other participants started learning how to play classical instruments, and were mentored by the Philharmonia Orchestra.

The participants are already asking where and when the next project is, so that’s another event for the new building to look forward to!

“I learned how to write lyrics that fit to the beat of the music. The lyrics we wrote were based on somebody else’s life but we wrote them as if it was coming from us. I got to meet new people and it boosted my confidence as I know now that there is no right or wrong lyrics, you just express yourself through the words. Working with Jake was good for us because he understands, he knows the ins and outs of writing bars.” – Jheri, participant.

“Symphonize was a big confidence boost for me, as we were put with people that we didn’t know but to work the best we could we had to introduce ourselves and work together. At first I was shy but the more it went on the more confident I got. I got to learn lots of new things and improve things I could already do such as singing. I had lots of fun and meeting new people made it even better.” – Aaliyah, participant.

Help us continue to change the lives of vulnerable and disadvantaged young people by donating to support our work!